Show all categories Chrystal Series Back 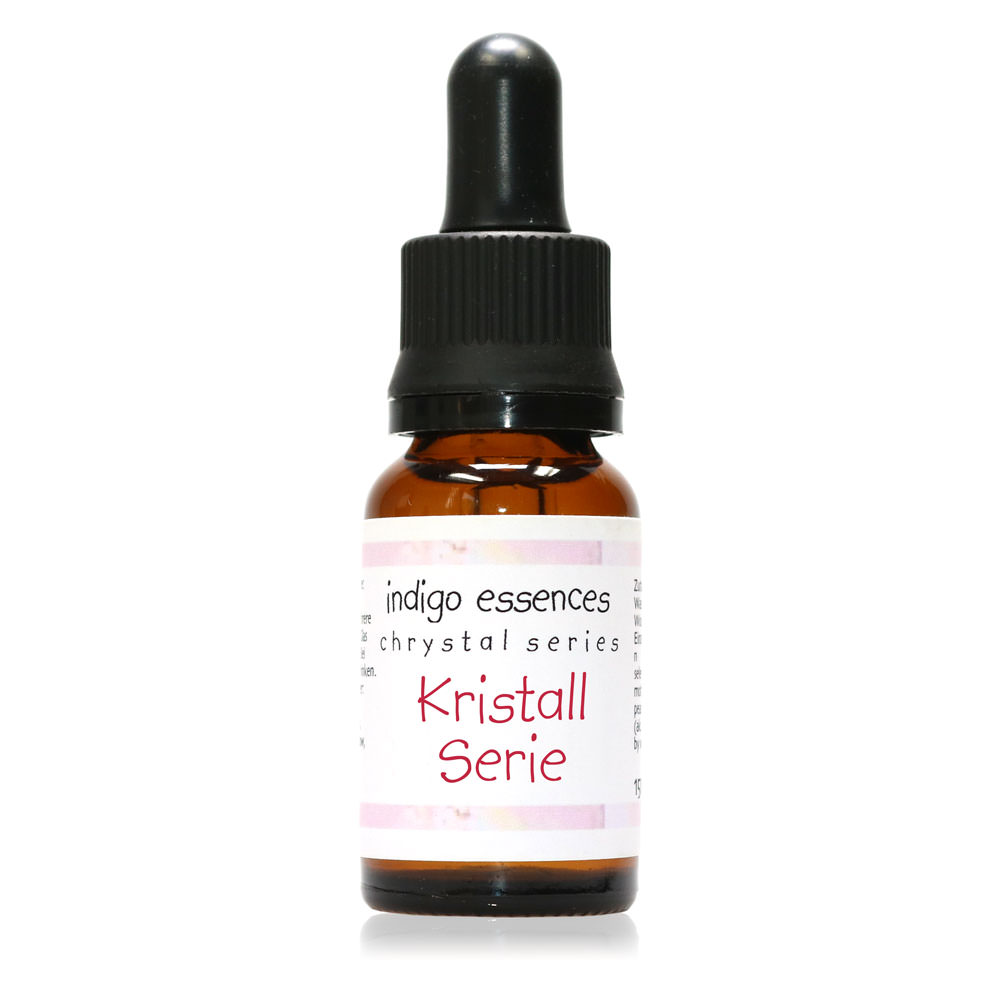 Helping Sensitives live in an Insensitive World
This series is for sensitives, people who feel things intensely and are sometimes overwhelmed by the energy of other people and places.
Essences such as Bubble, Software and Smoothie will help provide a buffer zone between your energy and the energy of others around you.
The Chrystal Series is also about creating a new life for yourself, your own heaven on earth. Essences such as Easy, Dragons' Blood and I'm in Heaven are particularly useful when you embark on new projects.
Show more

Main feeling: vulnerable to EMF/radiation/other peoples' energy Bubble protects babies from EMF from their first scan onwards. For adults this essence helps sensitive people to be in places where there are lots of chemical smells and electricity without being badly affected. Bubble also helps us feel safe in confined spaces where our energy body is constantly bumping into other people. 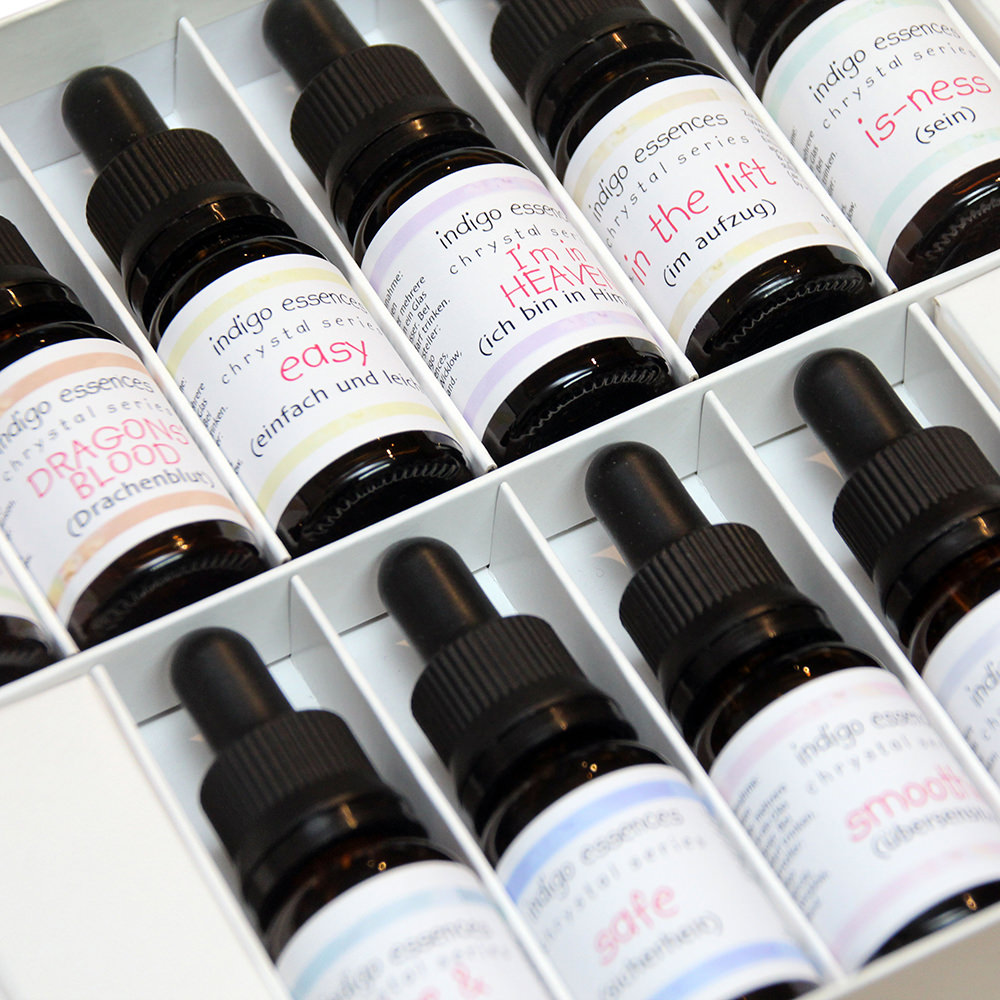 The Chrystal Series Set contains all ten essences of the Chrystal Series by Ann Callaghan and her Indigo Essences. The bottles are neatly packed in a decorative box. Live & Let Live, Bubble, Dragon's Blood, Easy, I'm in Heaven, In the Lift, Is-ness, Safe, Smoothie, Software 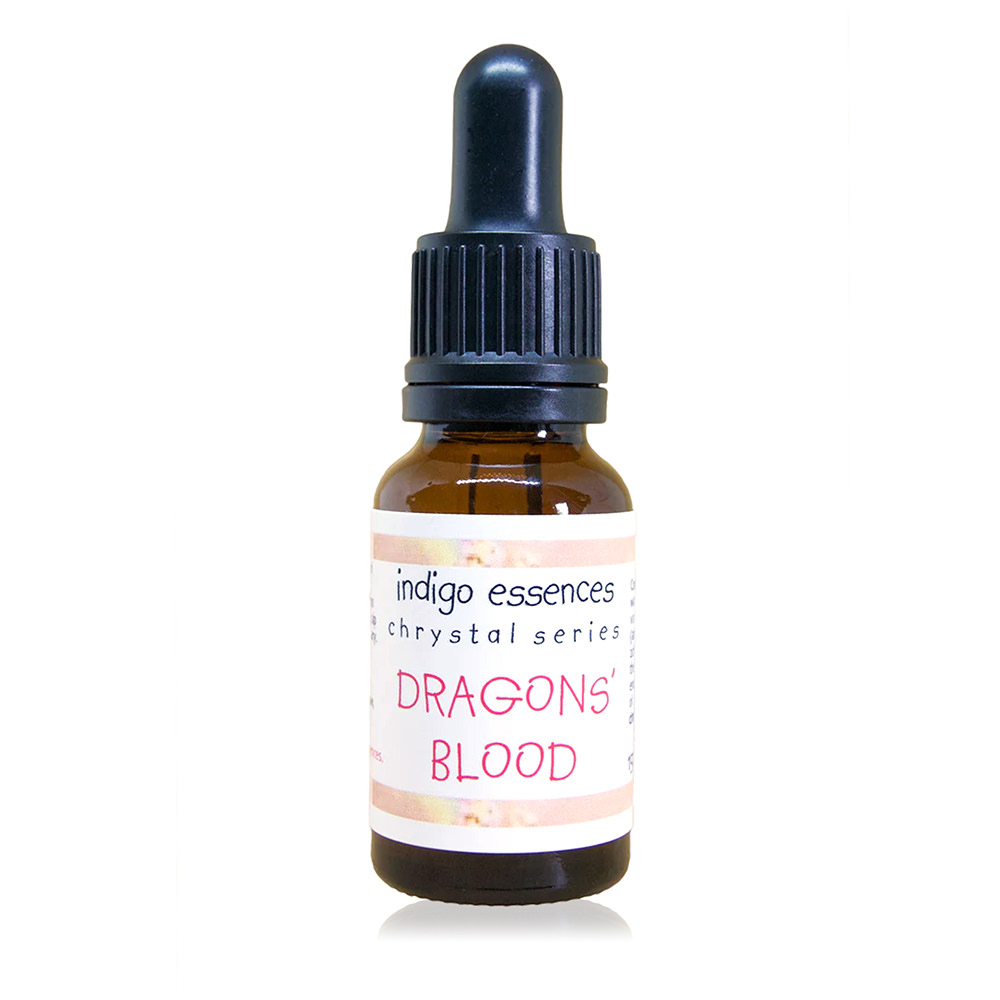 Main feeling: no energy/ungrounded For children, this essence helps a child to ground and feel protected. For adults, many of us feel truly exhausted from years of therapy and processing. This essence will help to put the fire back in our belly and get us moving again. It helps us to ground our energy, feel energised and bring new projects into being. By the way, the name Dragons' Blood comes from a colloquial term for the mineral Cinnabar. 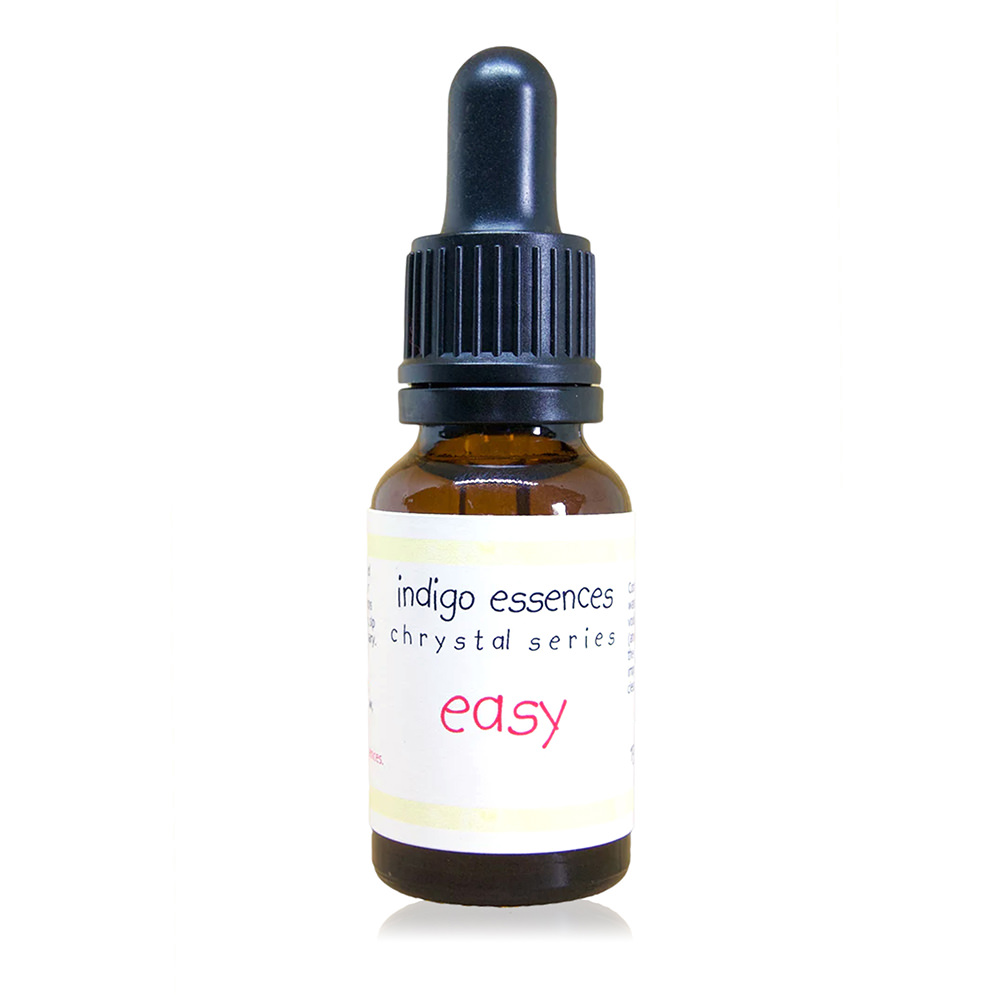 Main feeling: life is a struggle This essence came about after I asked some children what heaven would be like. The answer we got through this essence is 'easy'. No rush, no hurry, no fuss, no stress, no fear, no schedules. Easy. As we move into our new potentials and let go of our old stories, it's sometimes hard to know which way to go, which potential to choose, which option to pick. This essence is saying to us 'choose easy, if the option is easy, then it's the one to pick.' No more pushing, no more struggle, no more hardship. Choose easy, easy is what heaven would be like. 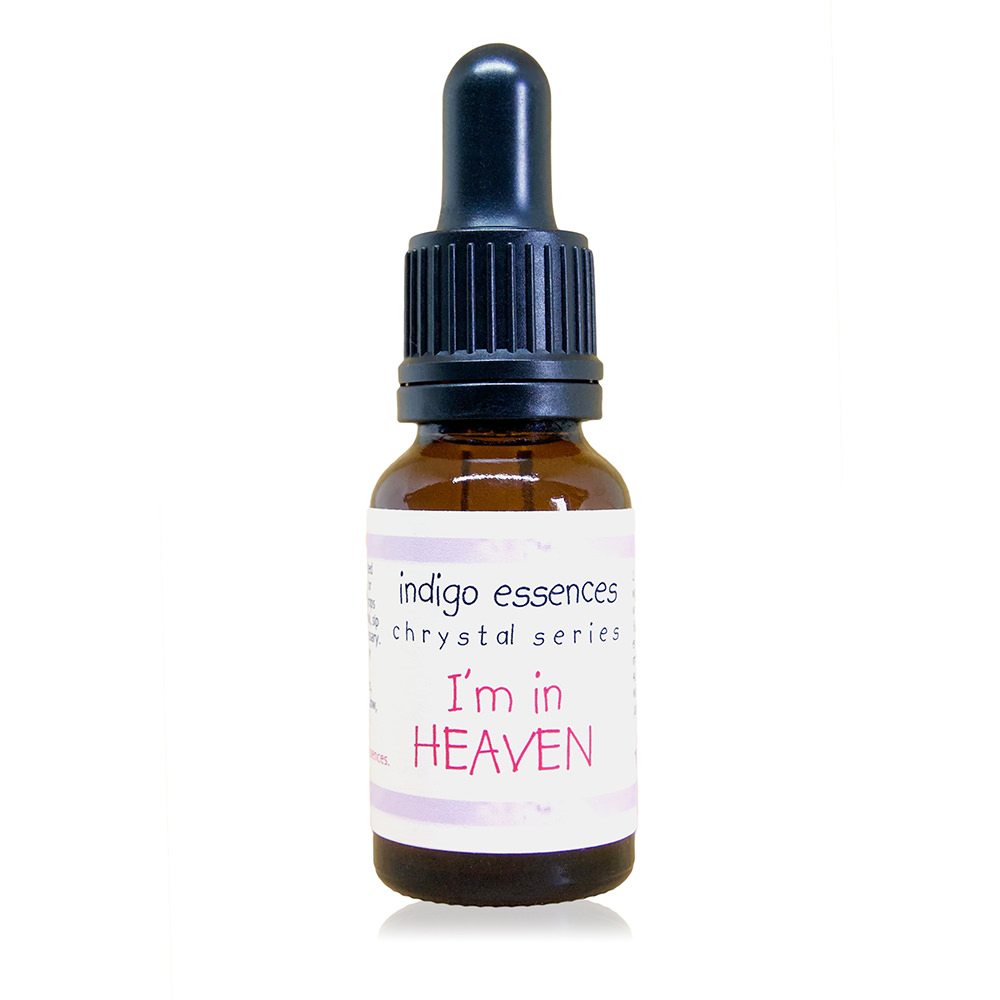 Main feeling: a bit fed up with life This essence wants to teach us about how our choices in every moment affect our reality. We can create heaven on earth right here, right now....if we choose to. We've all known that this is possible for a long time but most of us are not making the changes because of fear of the unknown. We are still choosing for our old reality - we are still choosing discomfort and struggle. Work with I'm in Heaven and this essence will put a spotlight on every choice, whether it be a thought, feeling or action and gently but persistently encourage you to change. 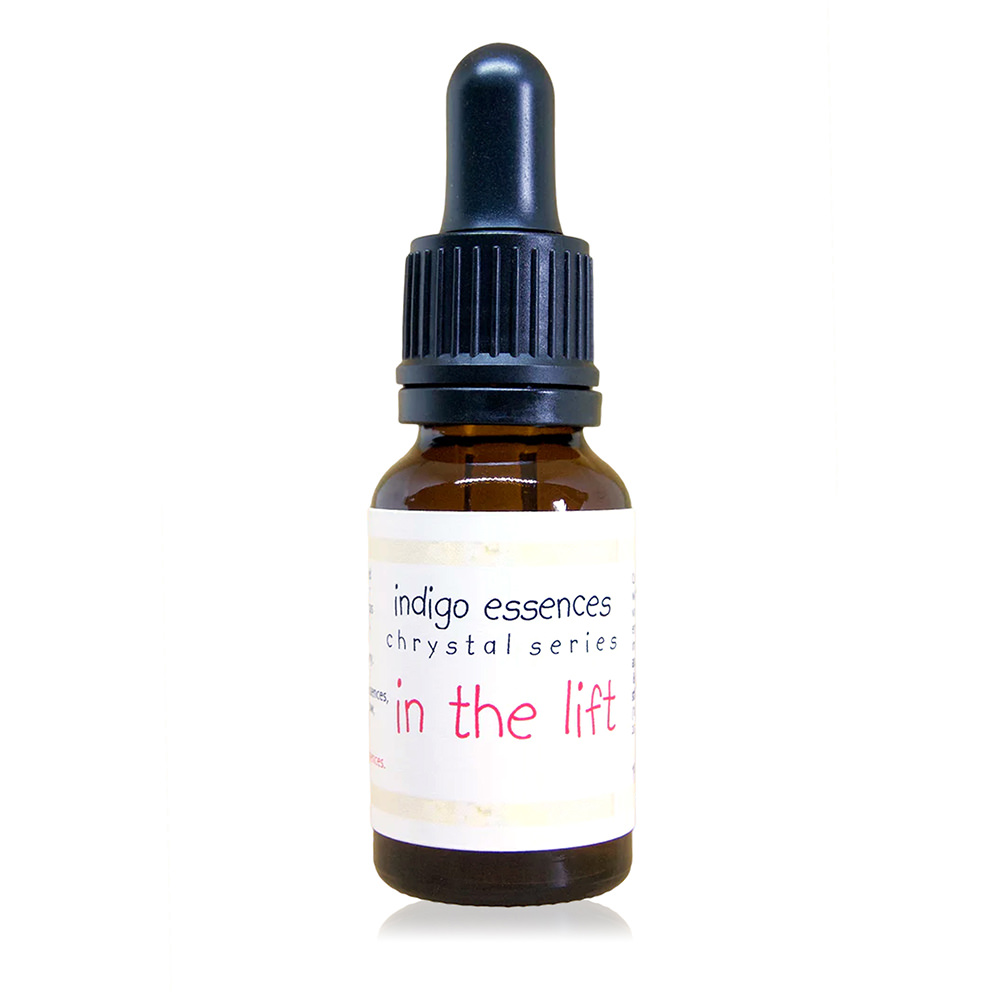 Main feeling: a bit spacy & ungrounded This essence can help very sensitive beings come down into the physical body and can also help them to go 'off ' to sleep and thus is included in our Sleep Easy combination. Helpful too for adults who feel they never really 'arrived' here. 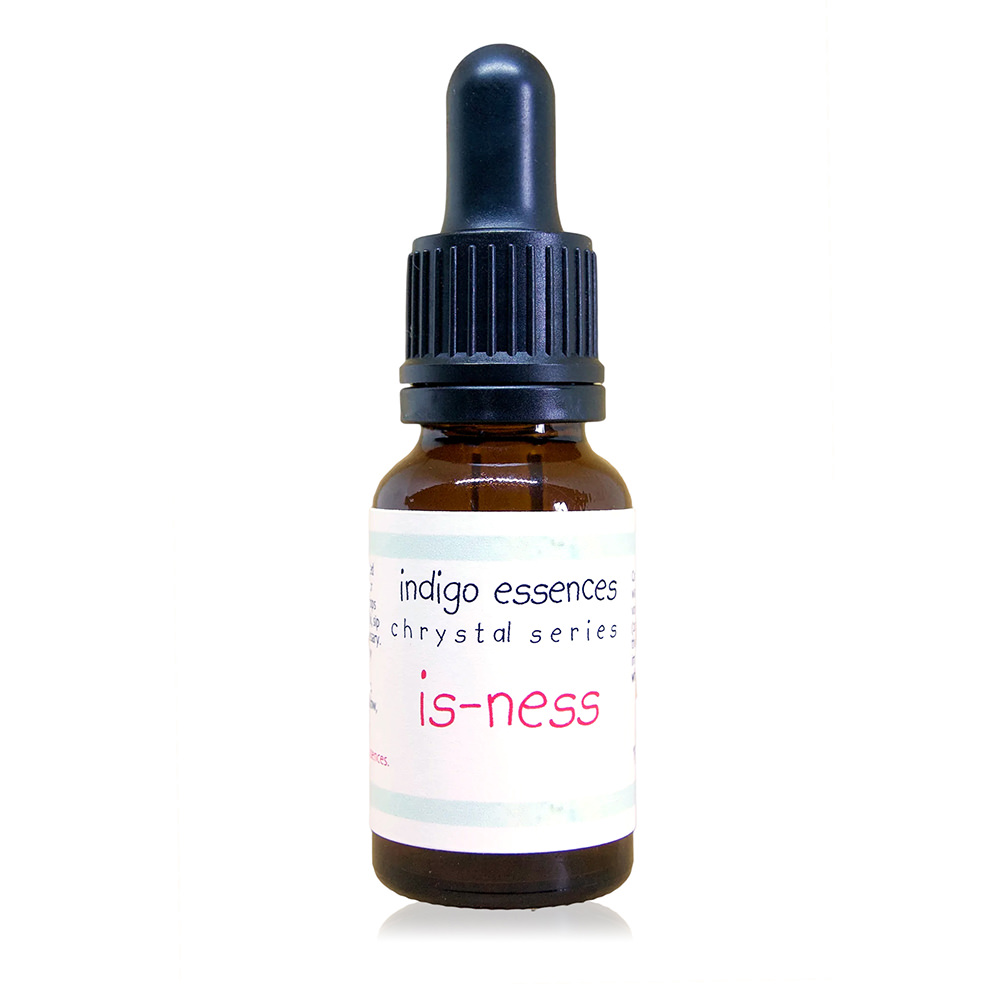 Main feeling: easily pulled away from your centre The piece of opal which made this essence is luminous green, blue and pink. Looking into the stone I feel part of the universe, the one-ness that we all came from, the is-ness of simply being. This essence helps to remind us what it felt like to be part of the universe, before separation, before we took on the patterning of human existence. We have worn this mantle of suffering incarnation after incarnation. These patterns are deeply ingrained and sometimes difficult to shift. It is time to let go. Sit with is-ness when you need help shifting the old patterns, when you want to remember who you really are. 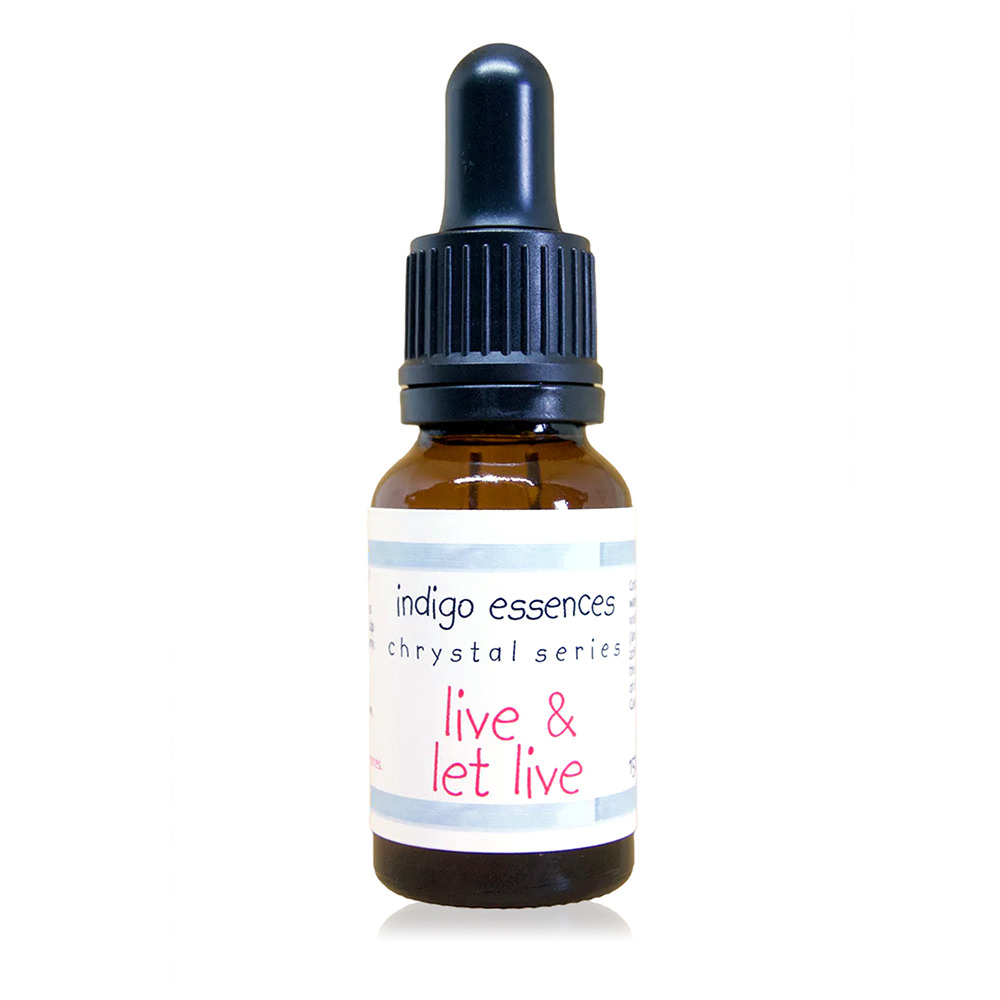 Main feeling: stuck in an old conflict This essence is particularly useful for people who find themselves stuck in an old conflict. Often sensitive people have poor boundaries and find it hard to extract their energy from the energy of another. The unique energies of Iceland, where this essence was made in November 2007, along with the energies of Calcite, help one form clear and constructive boundaries with people you used to be in conflict with. The land of Iceland itself sits on top of a constructive boundary between two tectonic plates, the Eurasian and North American plates. This means that, rather than erupting, the gap between the two plates is constantly being filled with new material formed from magma. Another energy contained in this essence is the energy of peace & the desire to make peace, which comes from the beautiful peace light lit by Yoko Ono l in Reykjavik in October 2007, just before this essence was made. And finally, the energies of Calcite itself, a bringer of clarity and confidence in our ability to live our dream. Bringing these energies of construction, clarity & peace together, Live and Let Live says to us that it's time to let go of the past, let go of the drama and the explosions, time to move on from conflict, time to be constructive, time to live and let live. 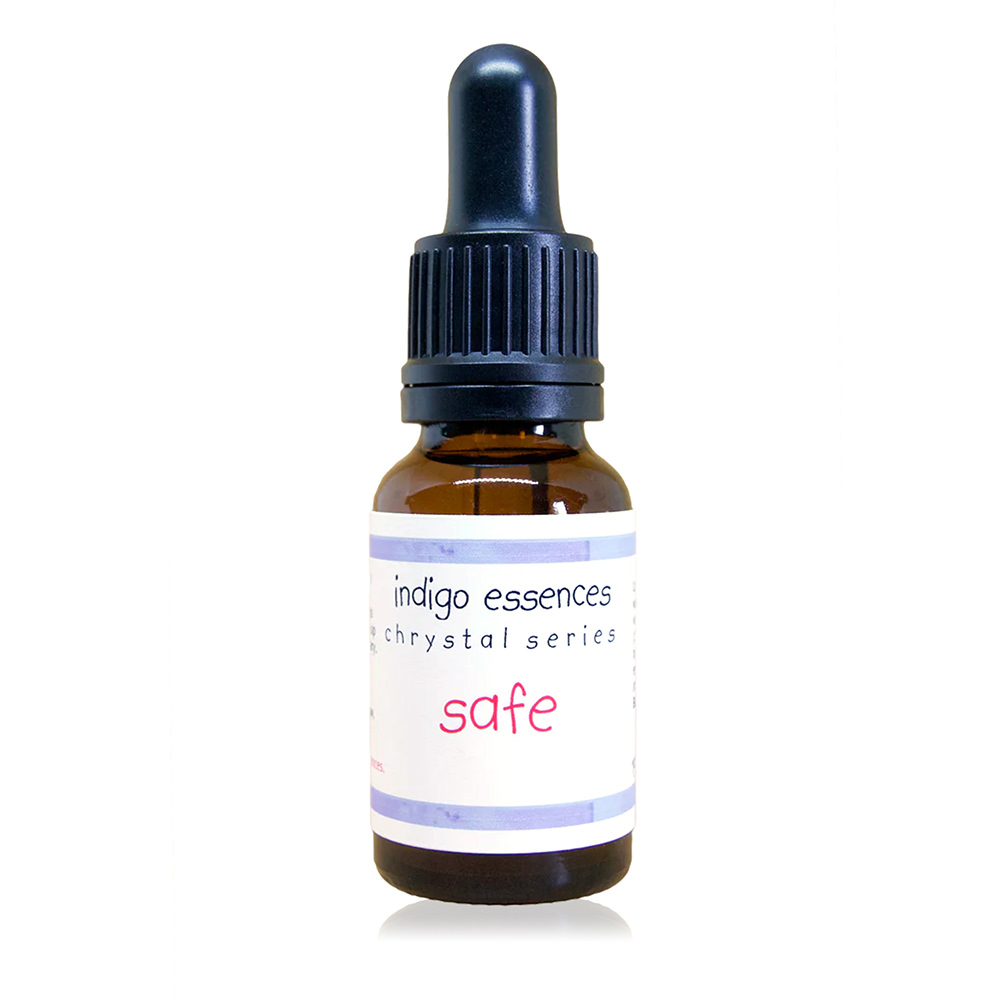 Use when you feel rattled & unsafe Safe is made with a stone called Barytes (barium sulfate) which is clear like quartz but very much heavier. Among other things, Barytes is used in mining to protect the drill bit. The drill bit penetrates new ground, which reminds us of the journey many of us are on at the moment. For adults, Safe is for times when we wish we'd never started on this journey of self-discovery, times when we feel very scared and unsure because there is no recognisable territory ahead. Safe wants us to know that we are always loved and protected and it is safe to continue on to new territory. For children, the drill bit also reminds us of the child's journey, like a drill in reverse, a seedling pushing up through the earth and growing into uncertain conditions. Safe will help the child to feel shielded and protected. 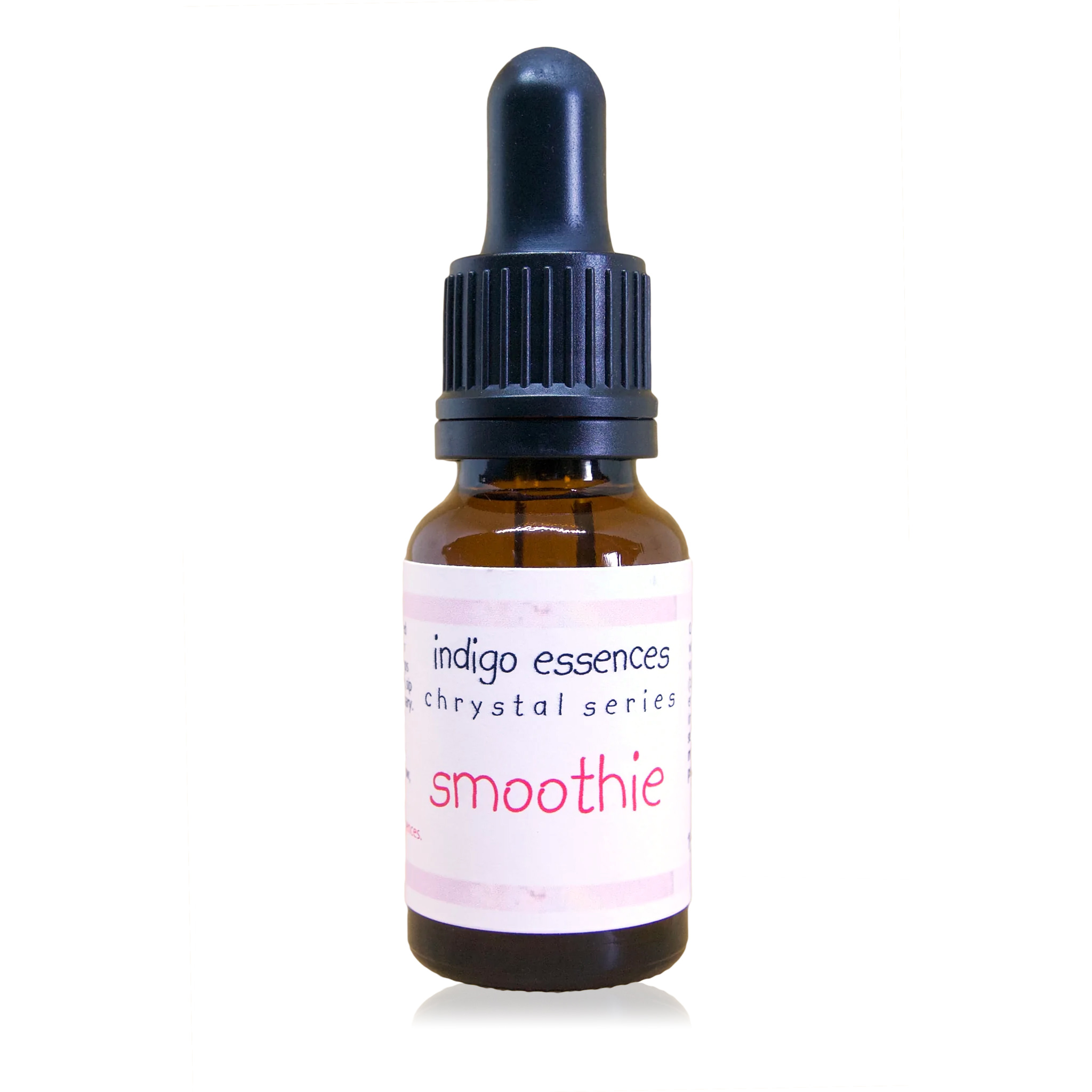 Main feeling: too sensitive to other people's energy and feelings For days when you want to crawl in a cave and stay there because the energy outside is a bit too rough. Taking Smoothie essence has the effect of throwing an energetic duvet over yourself which forms a buffer zone between you and the outside world. Made with a piece of elestial selenite and a mother of pearl shell, these energies combine to provide protection and comfort to sensitive beings. 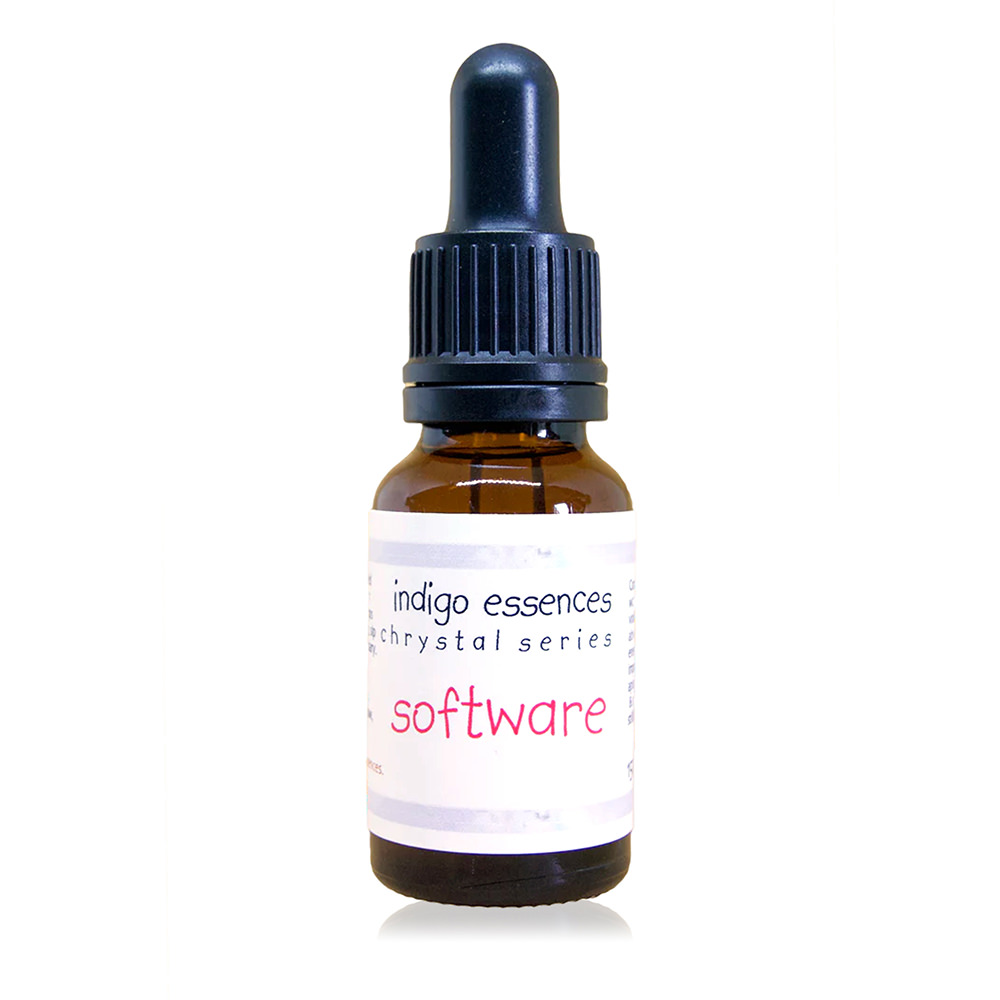 Main feeling: overwhelmed by other people's thoughts This essence is to help babies to keep the level of sensitivity they were born with, without being overcome by the pain and suffering of the human world. For very sensitive adults, this essence is a tool to help us to interface with a world that is very different to our own. Software will help us to keep our centre in the middle of other people's chaos.